Town of Anryu is located in a historical walking trail of Kishu Kaido (Kishu Road) en route from Sumiyoshi Taisha (Sumiyoshi Grand Shrine), which is adjacent to Anryu Sumiyoshi Shotenkai.

Unlike other shotenkai (shopping districts), approximately 50 stores at Anryu Suminoe Shotenkai stand surrounding an elementary school as the center.

Our shopping district has a long history; sales and commerce have been flourishing in Anryu since the Edo period. Members of prestigious families with a history of over 300 or 400 years still have been preserving the character of the town.

Anryu Suminoe Shotenkai is where children’s voices are heard with the lively atmosphere and traditional buildings remaining.

We strongly recommend you to come here and feel the history and culture while walking through the town of Anryu.

Time Travel through History of Anryu

The town of Anryu is reminiscent of history. It is described in Manyoshu, the oldest existing collection of Japanese poetry, as “the designated scenic viewpoint of the beach of white sand and green pine trees” in the ancient time. It is called “the road along the coast” in the Muromachi period as well as Kishu Kaido (Kishu Road) in the Edo Period.

The land of Anryu is adjacent to Sumiyoshi Taisha (Sumiyoshi Grand Shrine) and has a deep connection to the history of the shrine. You can feel the way they were thinking and living in the time of Edo. 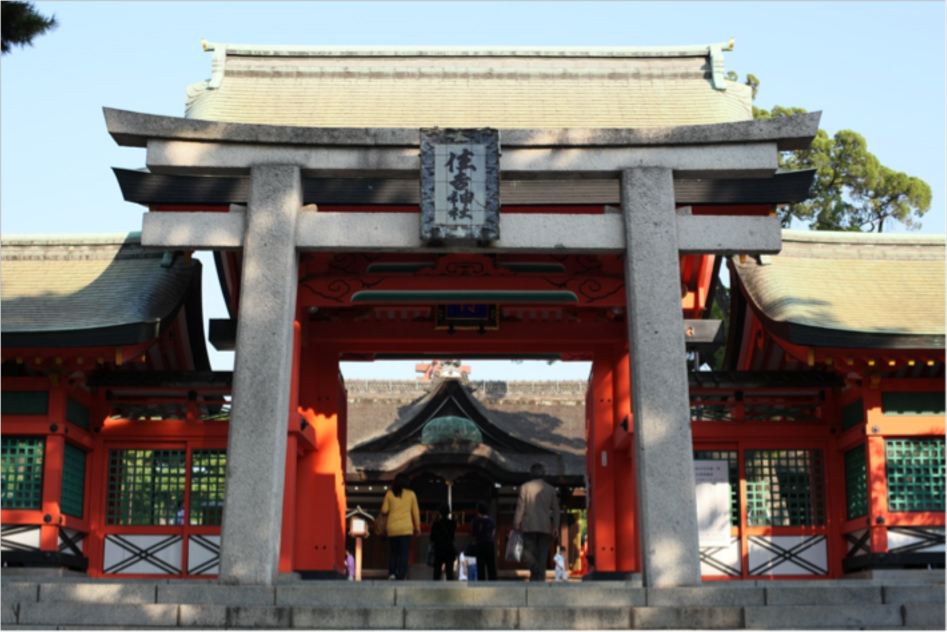 It is thought to be founded approximately 1,800 years ago, which means it has a longer history than of Ise Jingu (Ise Grand Shrine) which was built about 700 years ago.

Hatsutatsu Mairi, for which 200,000 people visit Sumiyoshi Taisha annually, is the way of worshipping by simply visiting 4 smaller shrines on the ground to make a wish come true. It is believed that business will prosper.
Web Site of Sumiyoshi Taisha 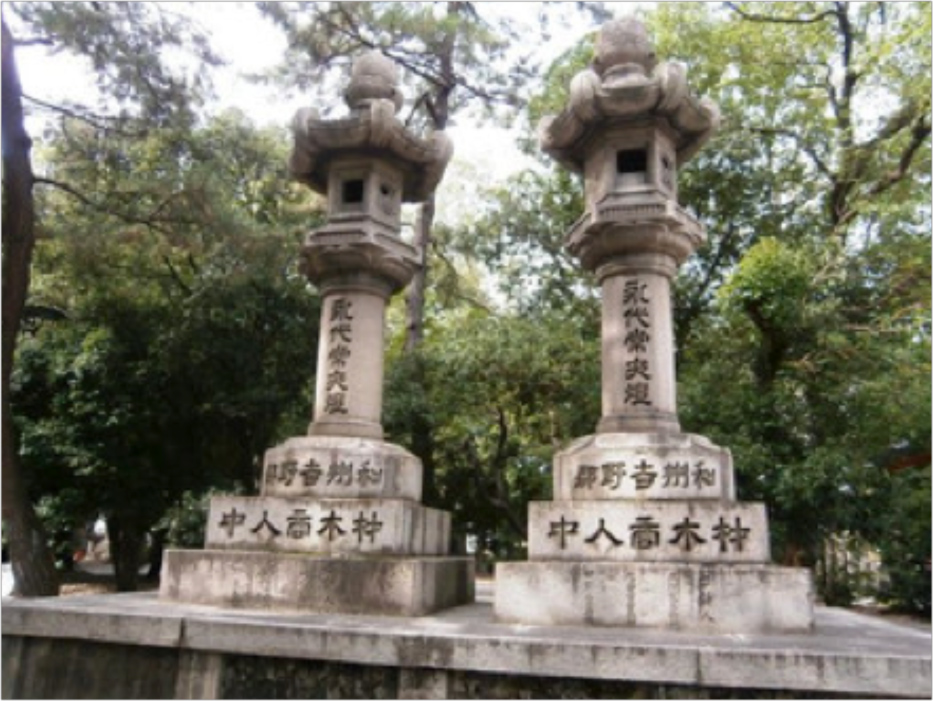 They say Kenzuishi emissaries and Kentoshi emissaries had visited the shrine for safe sailing wishes then left from Suminoenotsu Harbor.

Now, there are many gigantic Joyato (torches that light up throughout the night) which people have donated praying their safety by sea. 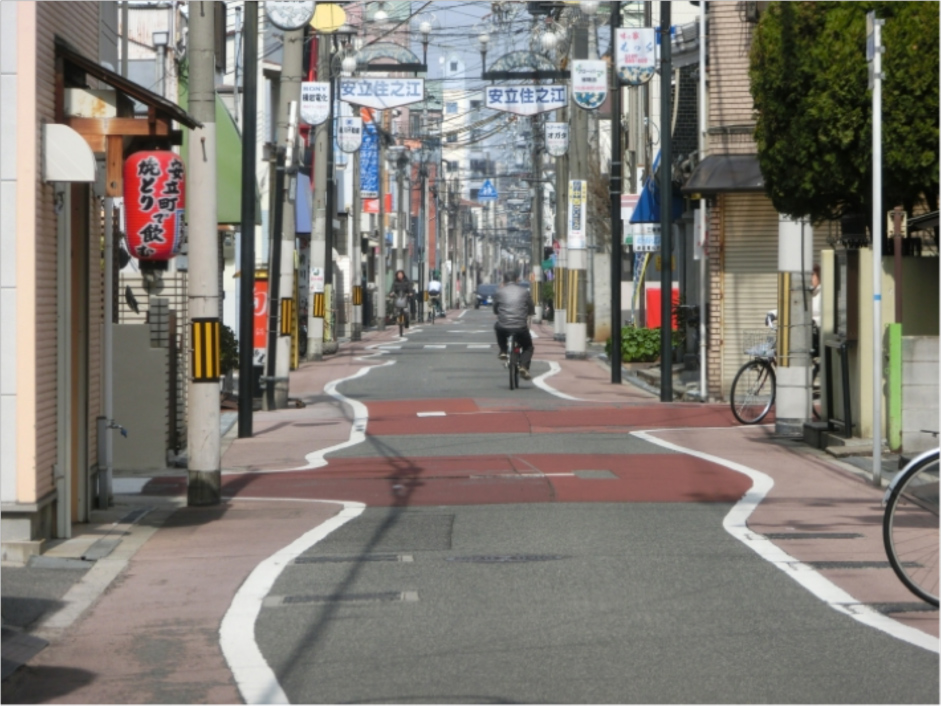 Kishu Kaido stretches from near Korai-bashi Bridge in Osaka city to Wakayama Castle. It is said that the trail has been designed to take advantage of sankin kotai (daimyo’s alternate-year residence in Edo) in the Edo period.

<The land of Anryu>
A lot of stores and residents representing Anryu Suminoe Shotenkai help to keep its history alive and guard the land now.

The townscape retains the charm of jokamachi (castle town).

(People in town were not allowed to look down at samurai from a higher place, and therefore, they avoided building a two-story house.) As you walk down this road, you can experience the history. 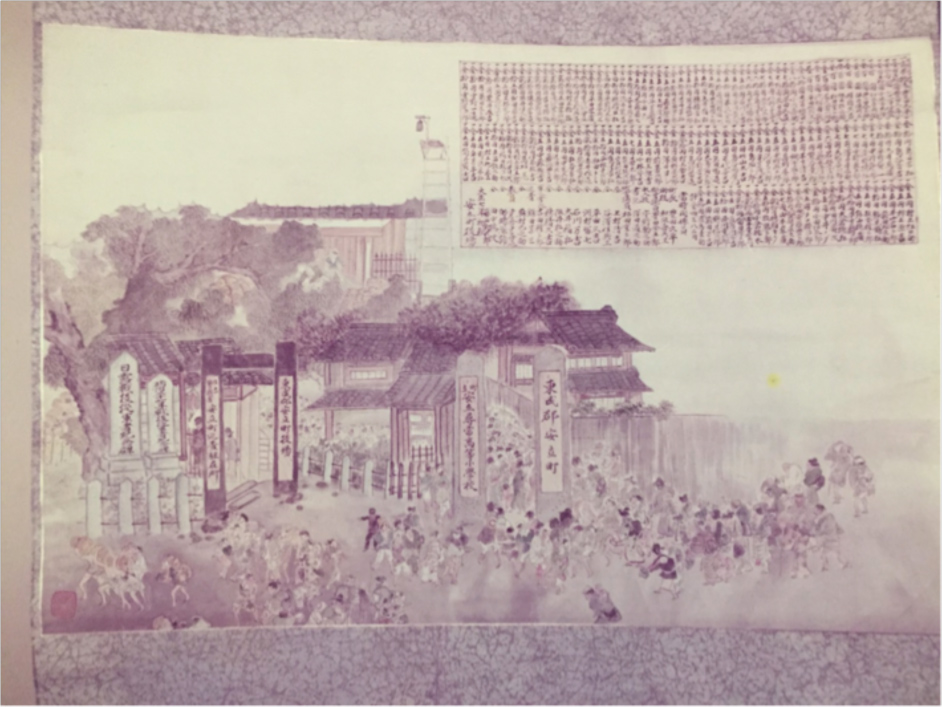 It is as if the voice of samurai can be heard “Shita-ni, Shita-ni (heads down, heads down).”

(During daimyo-gyoretsu or “feudal lord’s procession”, people must have sat on knees with their heads bowing down. Samurai called out “shita-ni, shita-ni” to prod people into the action.)

In the early Edo period, a great physician, Nakarai Anryu, lived in the land and people gathered to see him from all the nations. And so, the land became a village under the name of Anryu.

An ancient scroll tells that the land of Anryu was full of people.

The mascot of Anryu Suminoe Shotenkai was modeled after Issun Boshi

Also, here, Anryu, is the land linked with the fairy tale of Issun Boshi or “one inch boy.”

The summary of the story is as follows:
After a childless couple paid a visit to Sumiyoshi Taisha and wished for a baby, they were blessed with a baby boy, Issun Boshi. The boy’s height was an inch or so and never grew taller. One day he went up the river in his soup bowl boat to the capital, Kyoto. He defeated an ogre that had attacked a princess with his needle sword. When it ran away, it dropped a magic wishing mallet called “uchide-no-kozuchi”. As the princess swung the uchide-no-kozuchi in the air above Issun Boshi, he became taller into a full adult-size and then married the princess.

In the Edo period, manufacturing and distribution of needles were an indigenous industry in Anryu. And the material which Issun Boshi was wearing as a sword at the waist was a needle that had been made in Anryu.

You can feel how the merchants felt about the land of Anryu in the Edo period. When thinking about the story of “Issun Boshi” that had been conveyed by needle hawkers who had spread the needles made in Anryu throughout the nations. 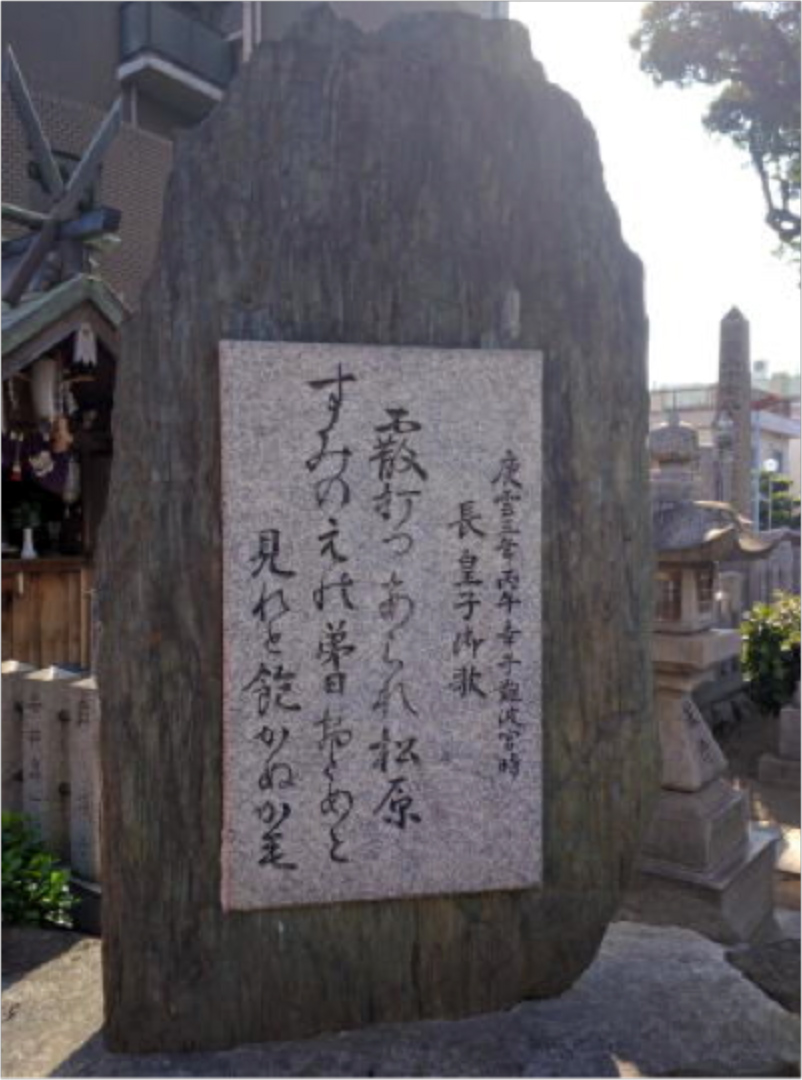 <Matsubara Park>
A park along Kishu Kaido (Kishu Road) in Anryu is Arare Matsubara Park. There is a stone monument inscribed with a piece of poetry from Manyoshu, vol. 1, the oldest existing collection of Japanese poetry, and it read:
Arare utsu Arare Matsubara Suminoe no Otohi Otome to miredo Akanu kamo

“Wind blows through a pine grove
Sounding like hailing
By the coast in Suminoe,
Viewing with maiden Otohi,
Never bores me with
Arare Matsubara”

Naganomiko (Imperial Prince Naga) who was a son of Emperor Tenmu visited Arare Matsubara and wrote this piece of poetry. What the poetry means is “No matter how long I watch the pine grove of Arare Matsubara, I don’t get tired of it when I am with Otohi, a maiden from Suminoe.” The location where Arare Matsubara had been is thought to be today’s Anryu.

Although there is no single pine tree around here, there was said to be seen a scenery, a combination of the whiteness of the beach sand and the greenness of the pine trees in between Sakai City and here in Anryu. They say the scenery amused people by the change of the four seasons throughout a year.

Tochihome means to glorify and admire the scenery of the land. It has been called this from the ancient times when a Japanese poetry is composed with a name of a land. In those days, people believed that words contained spirits. People believed that the more and more times a land was praised by words, the better and better the land became as the words were recited, and which would bring happiness to them. It was very important for them to compose a poetry in which the land was being praised, in order to improve and develop the land.
This poetry is a precious work which tells their desire to receive the blessing of the god in Anryu.

Come explore the road from Sumiyoshi Taisha through the shopping district to be a witness of that history. 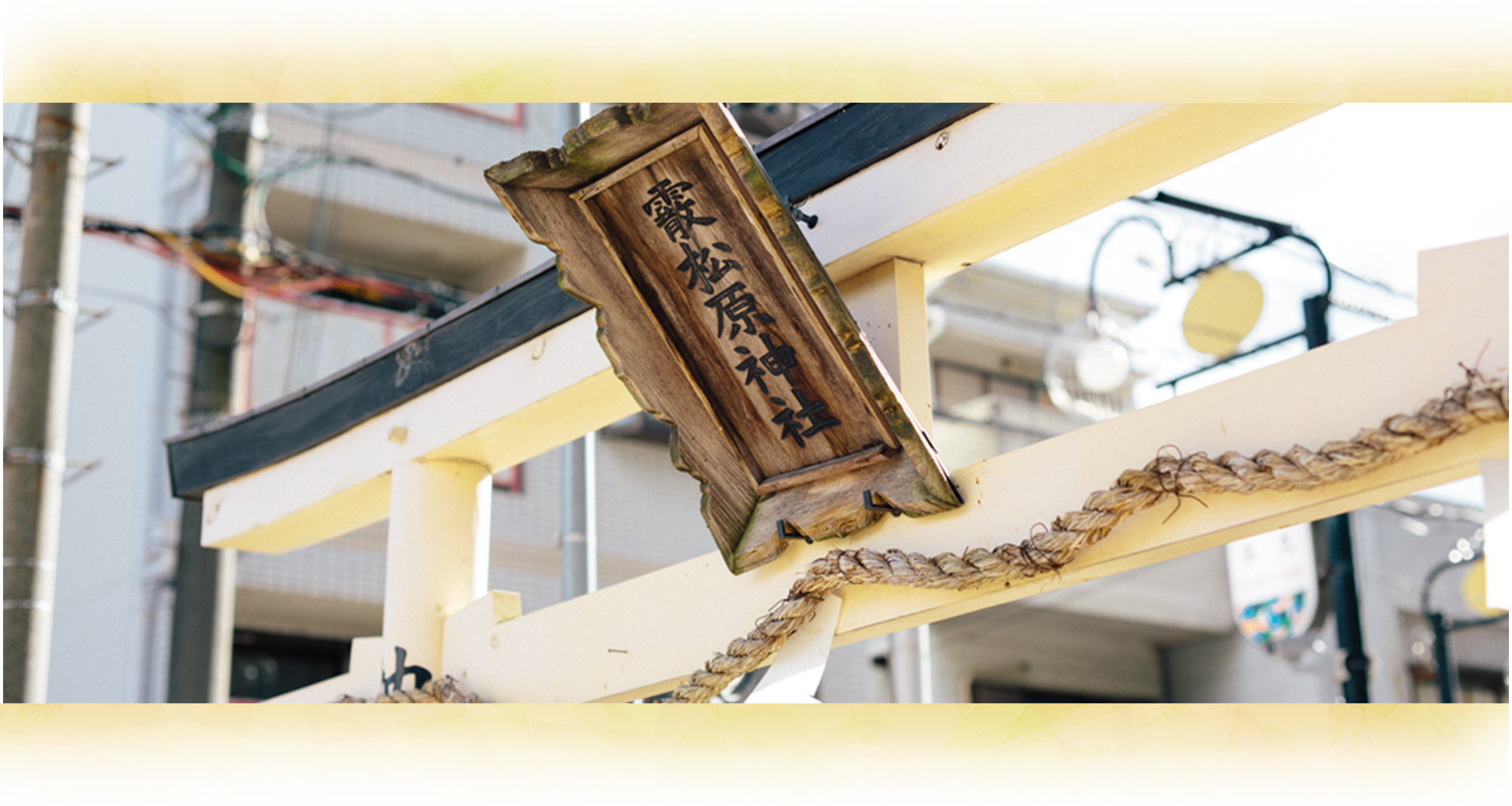 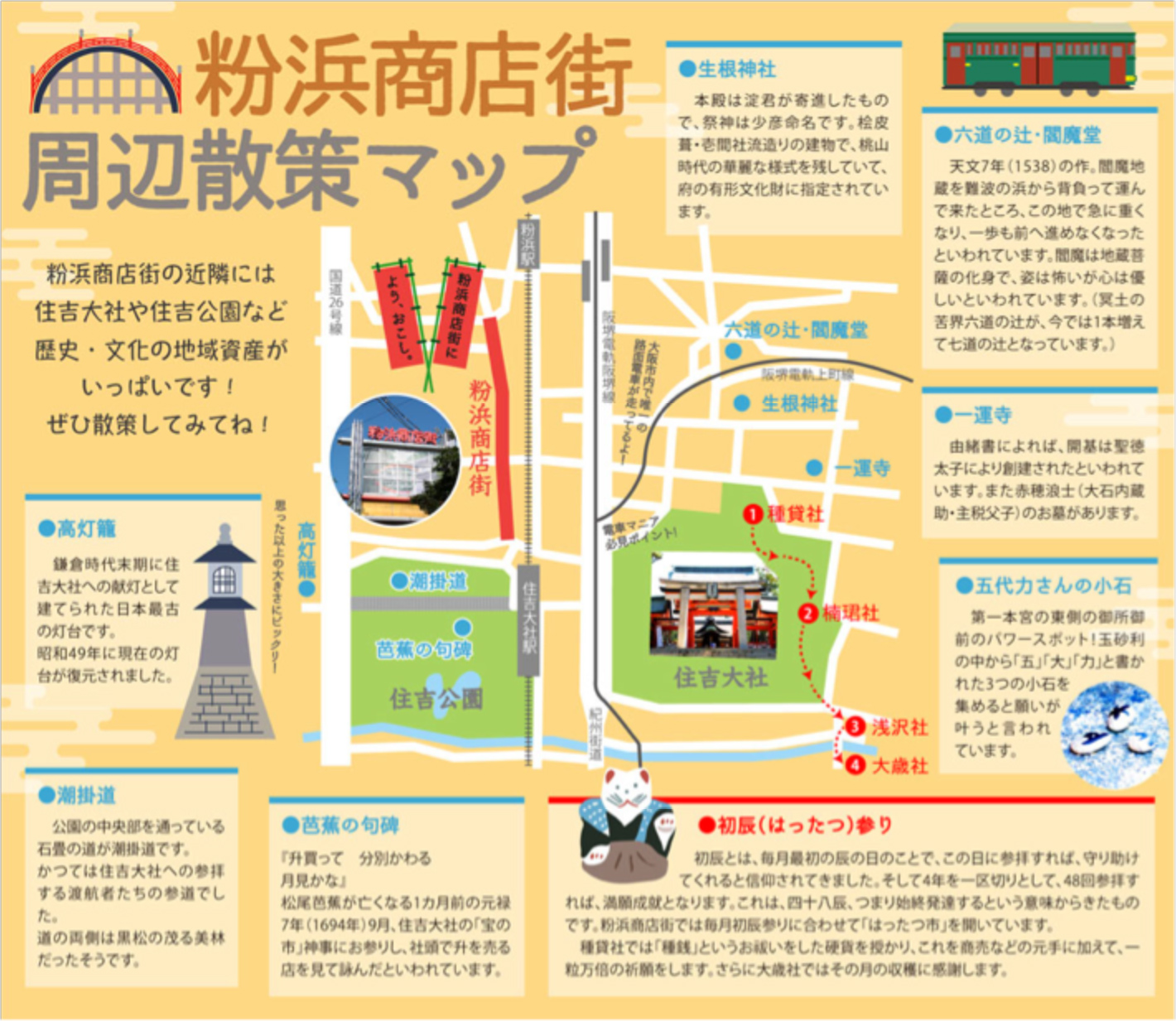 © 2022 The Official Website of Anryu Suminoe Shotenkai All Rights Reseved.